10 best things to do in Vietnam

It is said that, on only one visit, you can not really claim to have experienced everything that Vietnam has to offer. However, like any other destination you want to explore and tour, if you want to get the most out of your stay, you will need to make some serious preparations.

Long and narrow Vietnam, from the north to the south, has a wide range of customs and landscapes. It actually has something for everyone when it comes to the likes and favorite places to visit, food to eat, and scenery, among others. It is a serene tourist destination that is envied even by regular travelers.

Whether you like to walk around town, love to explore quiet towns on your own or have an obsession with islands, all your favorites can be satisfied here. And no matter if you plan to stay for a few days, a week, or a month, you need to try the 10 best things to do in Vietnam listed below.

1. Light a lantern at Hoi An

Every new year in Vietnam, Hoi An is transformed into a kaleidoscope of color and light for its Lantern Festival. The festival lasts for seven days, with thousands of colorful lanterns adorning the path from Hoi An Bridge to Hoai River Square. 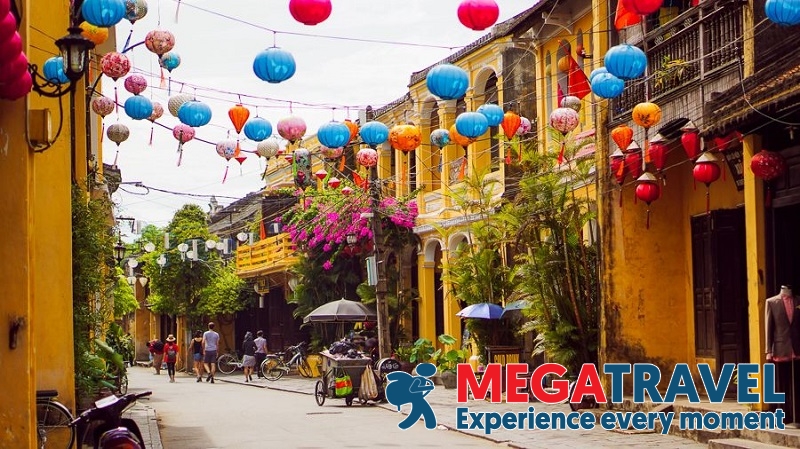 More than 50 workshops are taking part in the event, each trying to create the most beautiful lantern. The colors are bright and the designs are strictly traditional.

The heart of the festivities is the old town, between the Japanese Covered Bridge and the Cau An Hoi Bridge. It is crowded, chaotic, and festive, with spontaneous singing and food stalls at every turn. It’s just as much a celebration for locals as it is for visitors.

Thousands of lanterns floating on the river are the most breathtaking sight; hire a sampan boat to get a closer look. You can buy a lantern for a small sum and set it afloat, too.

Don’t worry if you can’t make it to Hoi An for New Year’s Eve: smaller lantern festivals are held every full moon. In 2021, it will be celebrated on 12 February, and on 1 February in 2022.

Halong Bay is rightly considered one of Vietnam’s most beautiful locations, with 1,600 limestone towers rising from its turquoise waters. As a result, it’s on the radar of any tourist, and every day, hundreds of boats sell cruise trips. The bay is massive, but it also feels crowded. 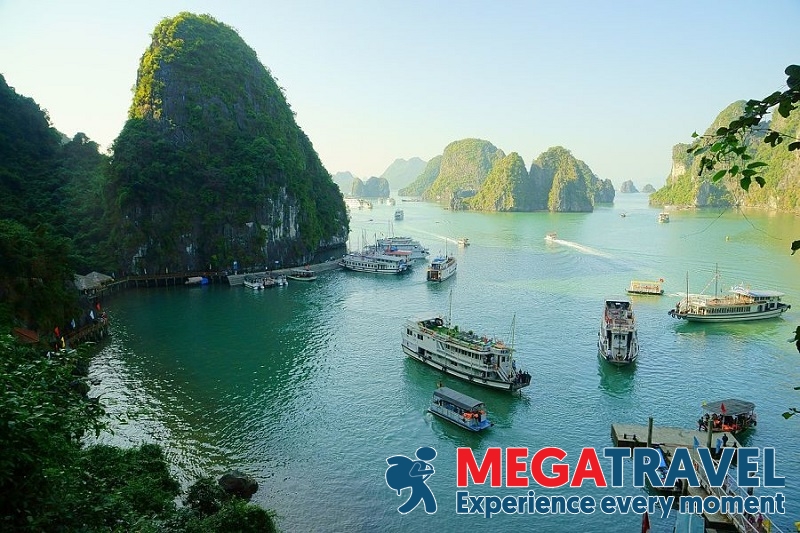 Only a few miles away, Bai Tu Long Bay offers the same jaw-dropping scenery but sees only a fraction of the visitors. You can explore uncrowded caves and small beaches here, and enjoy super-fresh, delicious seafood.

Boat trips to Bai Tu Long Bay, like those to Halong Bay, depart from the crowded dock at Halong City. But you’ll head in the opposite direction, to where the islands are a little smaller and a little more spread out-but, according to locals, they’re just like those in Halong Bay used to be. 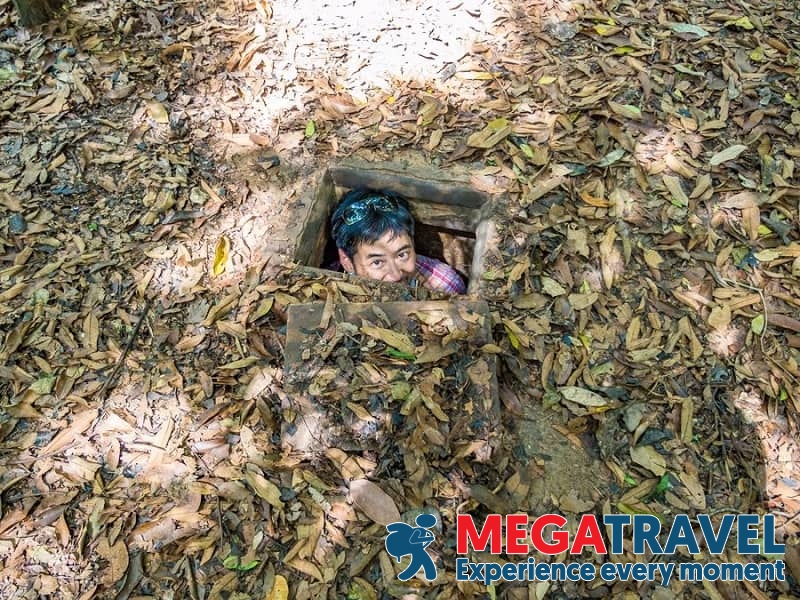 This extensive network of underground tunnels served not only as hiding places, but also as a communication and communication network, as a storage facility, and even as a field hospital for Viet Cong soldiers during the Vietnam War.

It was like the headquarters of the Viet Cong to fight the American and South Vietnamese military, and it consisted of hospitals, schools, air vents, escape routes, and booby traps. Interestingly, you need to find a guide to travel here as the entrance is well hidden and so narrow that only one person can pass through at a time.

4. Find romance in the love market at Sapa

The market town of Sapa, in the mountainous north of Vietnam, first became famous in the 1930s as a French hill station. The area, situated on a 1,650 m high mountain ridge, boasts fabulous views of the Hoang Lien Mountains and a colorful market every Saturday attended by hill tribes from the surrounding countryside. 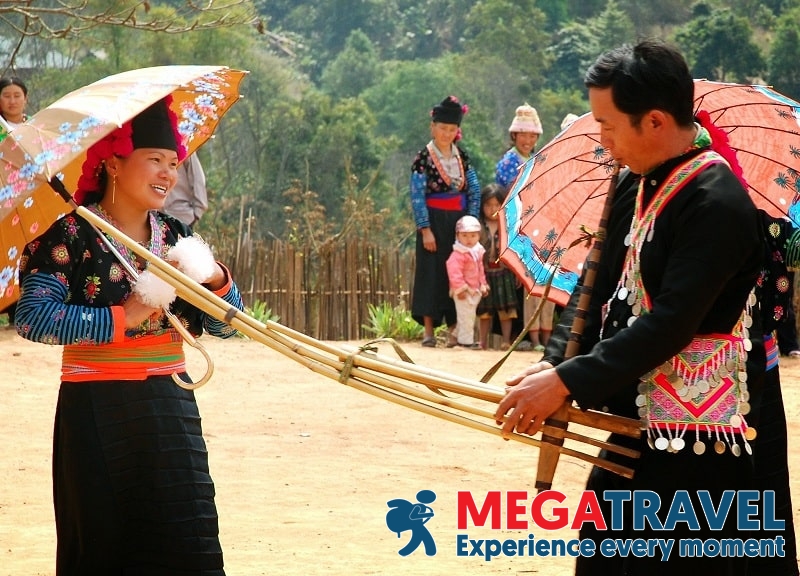 The town has become increasingly popular with tourists, but there are still ancient traditions hidden in its secret corners. One of them is the Love Market, where Dao (and H’mong) men and women come from miles around to sing love songs to each other. It was originally held at the end of Saturday’s market, but over-zealous visitors taking intrusive photos have driven the tradition underground.

The Love Market still exists, but now it’s taking place in secret places in the dead of the night, far away from the eyes of the visitors. But if your interest is genuine and you can find a local who is willing to trust you, romance can still be found.

5. Fall into the largest cave in Phong Nha National Park in the world

In the middle of Vietnam, near the border with Laos, Quang Binh province is a wild area of barely penetrable forest. The region is riddled with hundreds of deep caves, including Hang Son Doong, one of the world’s largest. It comprises a cavern so tall it could fit a skyscraper within it. 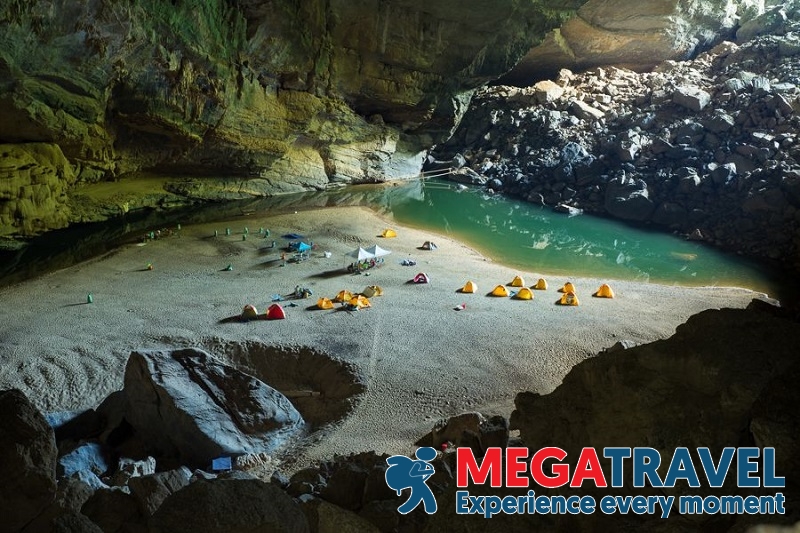 The small town of Phong Nha is the epicenter of the caving adventures of the area, its eponymous cave, another UNESCO-listed wonder worth exploring. Here, you can hire both the guides and the gear you need to get down to the caves.

If going underground doesn’t appeal to you, the area is also famous for trekking. The surrounding jungle is dotted with stunning waterfalls and an active and noisy population of monkeys and flying foxes.

Buon Ma Thuot is the regional capital of the central highlands of Vietnam, a beautiful area of thunderous waterfalls and the traditional villages of the local people of Ede. Look out for stilted structures that reach the ladder and are marked with carved breasts. They can only be used in this fiercely matriarchal area by the women of the house. 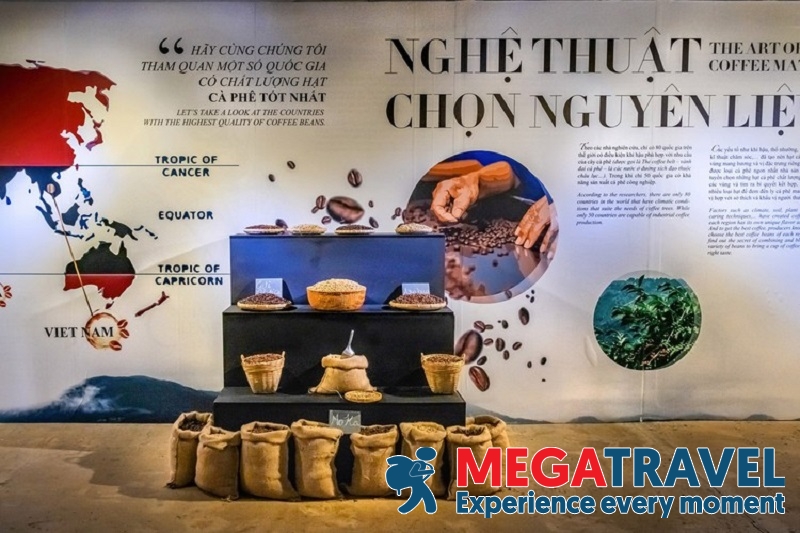 Buon Ma Thuot is the heart of the thriving coffee industry in Vietnam as well. The coffee company Trung Nguyen is the big player here, and in the area, there is no corner of the paddy field or industrial zone that does not carry their logo.

There are plenty of coffee-related attractions in the city. In the World Coffee Museum, visitors can learn about the country’s and world’s coffee industries year-round. In March 2021 and March 2023, during the biennial Coffee Festival, the city’s various coffee venues will offer freebies to celebrate the local produce.

You’ll probably come across ‘weasel’ coffee during your visit, also known as kopi luwak or civet coffee, which aficionados claim is the best coffee in the world. If you can’t visit the coffee heartland, be sure to taste some Vietnamese egg coffee while you’re in Hanoi.

Pho is a Vietnamese staple – a quick, tasty meal made of four simple ingredients: clear stock, boiled beef, rice noodles, and herbs or green onions. In Vietnam, you’ll find it served on the street corners and in upscale restaurants, as well as in every family home.

Hanoi has gained a reputation as Vietnam’s pho capital. Every restaurant here has a secret recipe. Take your time looking for the best – that’s part of the fun! Top tip: head to Lo Duc in the French Quarter and sit down at Pho Thin. 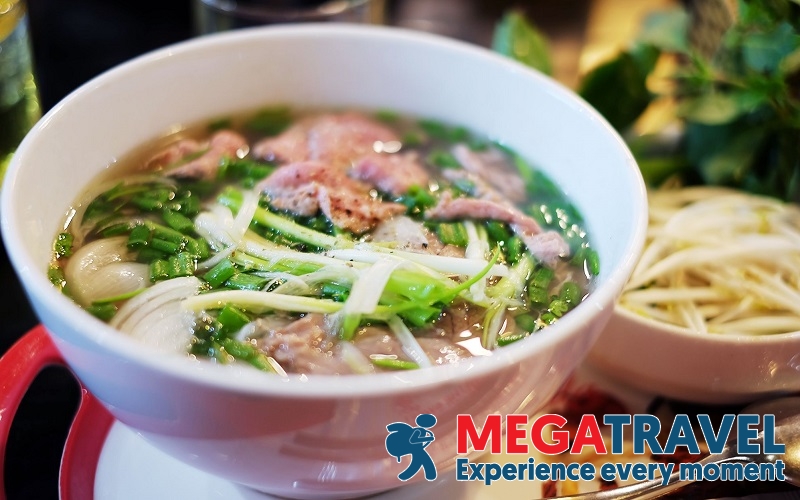 This unassuming pho house, with wooden benches and laminated tables, does things a little differently – such as stirring beef in garlic before adding it to the soup. Local foodies insist that it gives pho an unusual smokiness that you’re not going to find in other restaurants. Pho Thin is packed all the time, but once you’re inside, you’ll know it’s worth the wait.

More than 60 percent of the population of Vietnam was born after the end of the Vietnam War in 1975. But that doesn’t mean that his war-torn history is ignored. As a nation, Vietnam has moved on, but the sacrifices made by both sides of the conflict are still remembered throughout the country, particularly in Ho Chi Minh City. 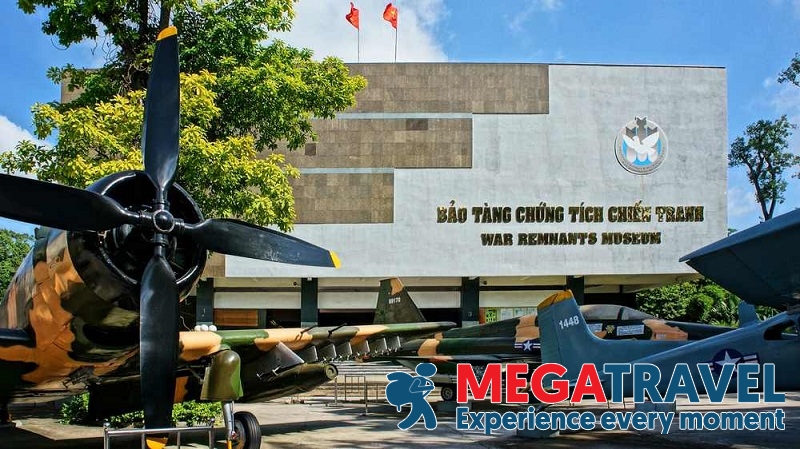 The Ho Chi Minh City Museum has several informative exhibitions and explains the bloody past of the country through photographs, artifacts, and memorabilia. It’s done sensibly, without glossing over the atrocities, and (rather ironically) it’s housed in Gia Long Palace, where Ngo Dinh Diem spent his final hours in power before he was assassinated in 1963.

The War Remnants Museum is a more grisly – but equally crucial – reminder of local atrocities. From the eerie bomb remnants and first-person accounts of war veterans to the bloodstained guillotine and the photographs of horrific napalm burns, this is a chilling reminder of life not too long ago.

Tây Ninh, a busy city on the Mekong Delta, is perhaps the most unlikely holy city on the planet. Here, the Cao Dai Temple, the Holy See of the Cao Dai religion, sits among busy street stalls and noisy traffic. 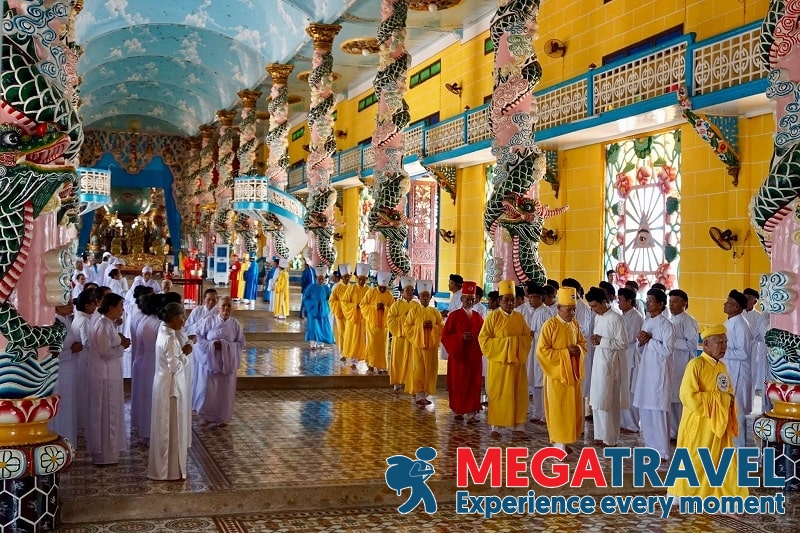 Caodaism is a Vietnamese hybrid religion founded in the 1920s. It fuses Christianity, Buddhism, Taoism, occult, and Islam with the ultimate aim to break free of the cycle of life and death. The sect reveres, among others: Jesus, Buddha, Mohammed, and even French novelist Victor Hugo.

From a distance, the towers of the temple resemble a parochial church. But closer inspection reveals an eclectic facade of sword-branding gods, swastika, a communist red star, and an Orwellian all-seeing eye. Prayers are performed four times a day, with one at noon popular with day-trippers from Ho Chi Minh City.

Halfway between Hanoi and Ho Chi Minh City during the Vietnam War, Hue marked the gap between the north and the south. Set on the beautiful Perfume River, it has always played a significant role in the history of Vietnam and is dotted with significant historical sites.

It’s a great place to cycle as well. Start in the cool morning and head out of town for three kilometers to the Tiger Fighting Arena. It was the Colosseum version of Vietnam, a place where elephants and tigers would fight to honor the monarchy’s strength. Next, before reaching Vong Canh Hill, head to Tu Duc Tomb—the best place for panoramic views of the Perfume River. 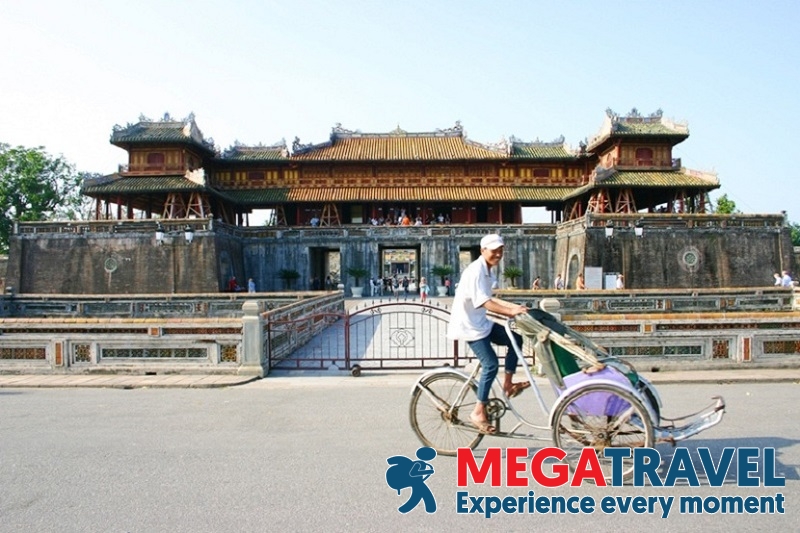 From Vong Canh Hill, it’s downhill to one of Hue’s most atmospheric pagodas, Tu Hieu, located in a quiet and picturesque pine forest. Swing by the tomb of Minh Mang, the second emperor of the Nguyen dynasty, before going back to town.

You have two options upon reaching the Imperial Citadel’s walled fortress: take a leisurely cycle through the UNESCO World Heritage Site and the Forbidden City version of Vietnam, or enjoy a relaxing drink next to the Perfume River.

10 best hiking in Vietnam with the most picturesque views