Where to eat the best Pho in Ho Chi Minh City

Pho is one of the most omniprésent plates in all the country in every town and city on almost every street corner. But as common and unpretentious as pho is, don’t confuse it with being a simple dish.

The best-known pho joints in Vietnam have been run for decades as family businesses. They have perfectly-honed recipes that are closely guarded secrets passed down through generations. It often takes 6-8 hours to prepare the beef broth and can contain dozens of ingredients, including onion, shallots, ginger, cinnamon, anise, cinnamon, and roasted pepper, just to name a few.

It is largely a matter of personal opinion that makes the perfect bowl of pho. While some people prefer the simpler, more earthy northern pho flavors typically found in Hanoi, others swear by the more complex southern pho composition with a heaping pile of fresh herbs on the side.

One of the oldest in the city, Pho Hoa is a favorite among locals, expats, and tourists. It has a perfect bundle of atmosphere, quality food, and a great location. It’s easy for this place to find glowing reviews, which is why it’s famous for its signature dish. 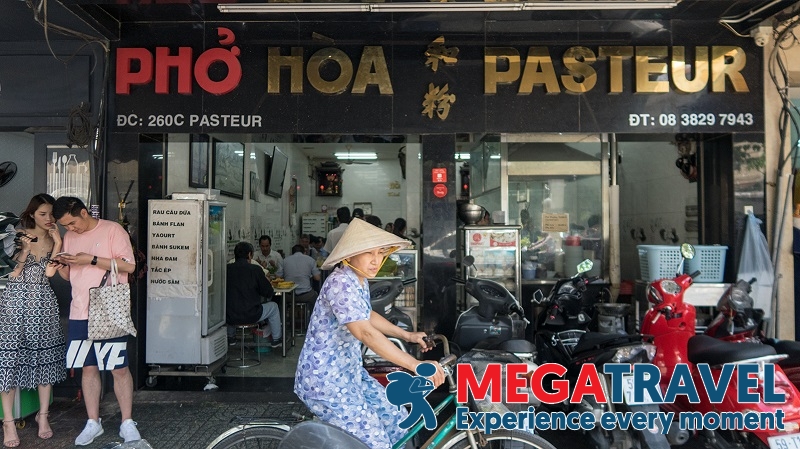 This 50 years old Pho restaurant is listed in many guide books and foreign travelers who visit Ho Chi Minh City are very popular. And while the price at Pho Hoa Pasteur is much higher than you would expect to pay for a pho bowl in Vietnam, you will still find plenty of locals dining here. 90,000 VND for a large bowl. 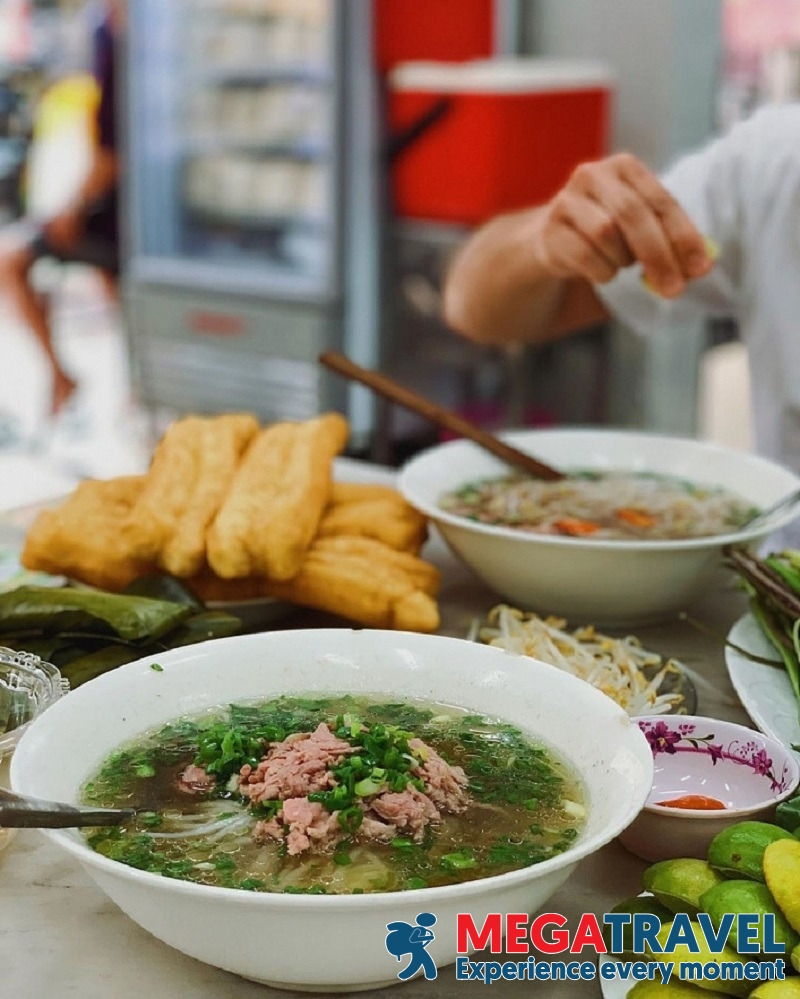 If you prefer vegetarian food, go to Pho Chay Nhu. It’s down an alley near Da Kao’s Le Van Tam Park (District 1). But finding this place is part of your experience. The bowl of their vegan pho is packed with mushrooms, tofu, carrots, and onions. And with a price tag of just 30,000 VND, that’s the cheapest pho on our list! 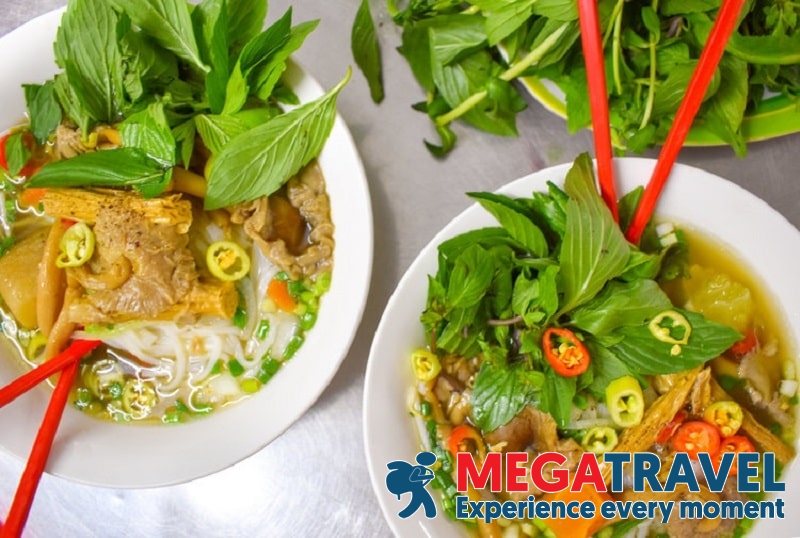 Pho Chay Nhu has a large vegetarian menu featuring classic Vietnamese dishes such as bò kho, mì Quảng, bún mắm, and cơm tấm sườn. Besides pho, we recommend fried mushroom dumplings – you’ll find a plate of them at your table. Pho Chay Nhu is the best vegetarian pho in Ho Chi Minh City, although there isn’t a ton of competition.

Pho Le will certainly be among the top contenders in any conversation about the best pho in Ho Chi Minh City. Since the 1970s, Pho Le has been serving up the delicious southern-style pho. It has become one of the favorite noodle shops in the city and the broth is delicious. You can always count on this hygienic and reasonably clean pho restaurant. 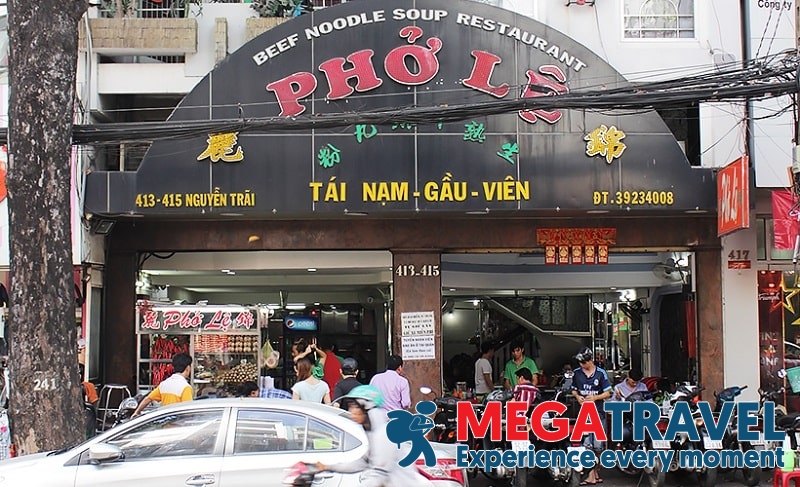 For us, the highlight is the large, flavorful beef flank cuts they refer to on their English menu as ‘brisket’. We therefore strongly recommend ordering the Phở Nạm or Phở Tái Nạm. A big Phở Tái Nạm bowl will set you back 75,000 VND ($3.25).

Another famous noodle shop that is part of any conversation about the best pho in Ho Chi Minh City is Pho Hung (Vietnamese: Phở Hùng). Accompanied by steamed bean sprouts, limes, chilis, and a heaping bowl of fresh herbs, they serve classic southern-style pho (cilantro, Thai basil, and paddy herb). Super flavorful and oily is the broth.

They have a convenient location in District 1, so to get a great bowl of pho, you don’t have to venture too far from the city center. Also, their dining room is air-conditioned, which is a huge plus in Saigon’s relentless heat. If you stay near Bui Vien Street, Pho Hung is only a short walk away or a motorbike ride away. 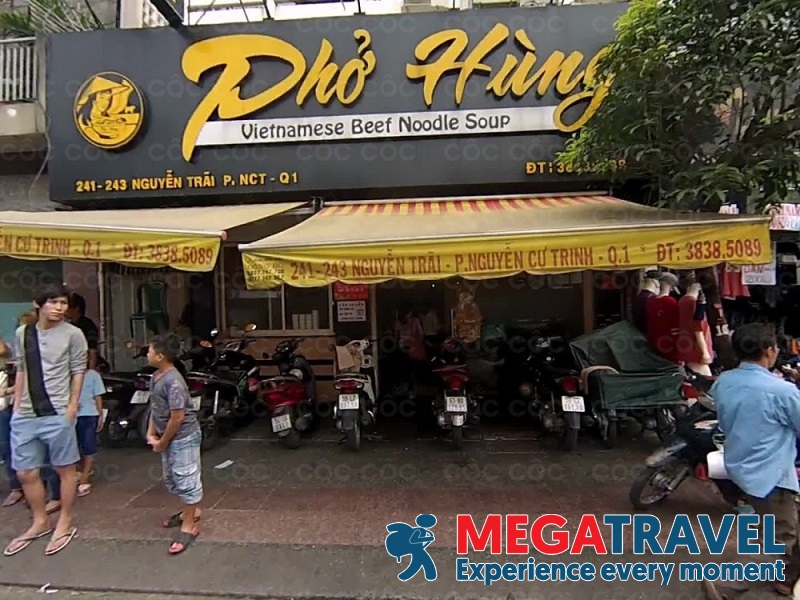 Pho Hung has a comprehensive English menu, so ordering is easy. And they have pho-based chicken, too, if you’re not into beef. It costs 75,000 VND for a large bowl of phở tái nạm and 70,000 VND for a small bowl. A large combo bowl (Phở Hùng đặc biệt) will set you back VND 85,000.

Pho Hung is also open quite late, to be precise until 3:00 am. So if you find yourself craving for a late-night, then after midnight in Ho Chi Minh City, there’s no better place for pho. 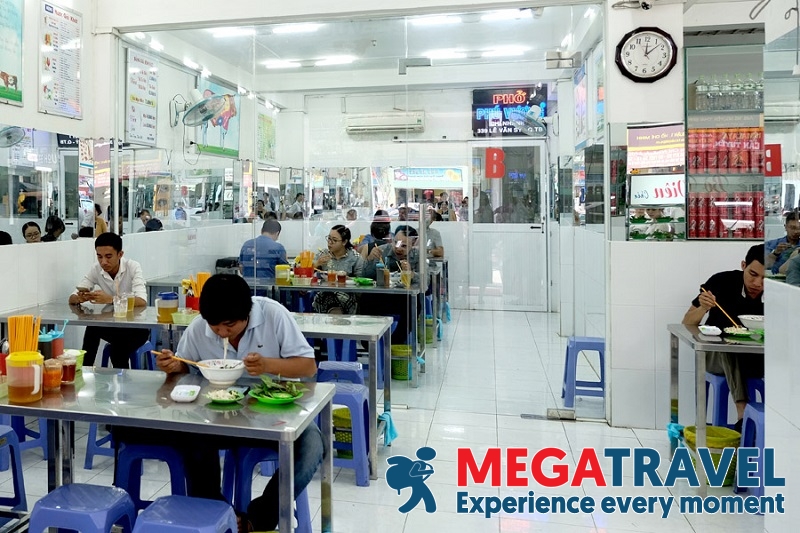 As they’ve become more popular, several of the other best pho restaurants in Saigon have raised their prices, but Pho Phu Vuong has remained quite reasonable. We believe that pho here offers the best value of any District 1 noodle shop. The price for a large pho cube is 65,000 VND and is provided with a plate full of fresh herbs, mint and cilantro, lime, and chili pieces. 60,000 VND is a small bowl and 80,000 VND is a combo bowl.

Inaugurated for the first time in 1954, Pho Tau Bay (Vietnamese: Phở Tàu Bay) is yet another long-standing noodle shop in Saigon that is well-deserved for its reputation. It’s a bit further afield than the other restaurants on our list, and you’re unlikely to encounter too many foreigners here. 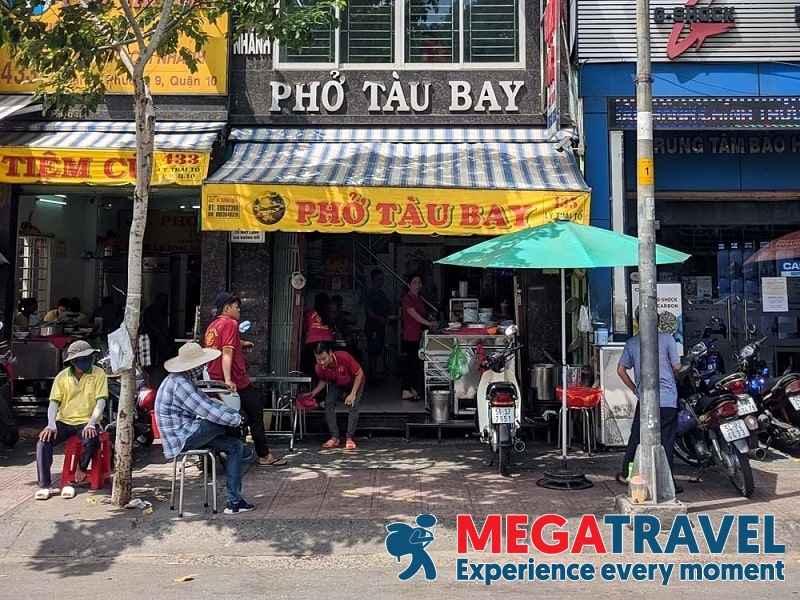 At Pho Tau Bay, the broth is great and you’ll find on every table a heaping plate of herbs, as well as the typical selection of sliced chilies and limes. The pho also comes served with an additional bowl of beef and green onion drippings that can be added to your soup if you prefer extra fatty and flavorful broth. 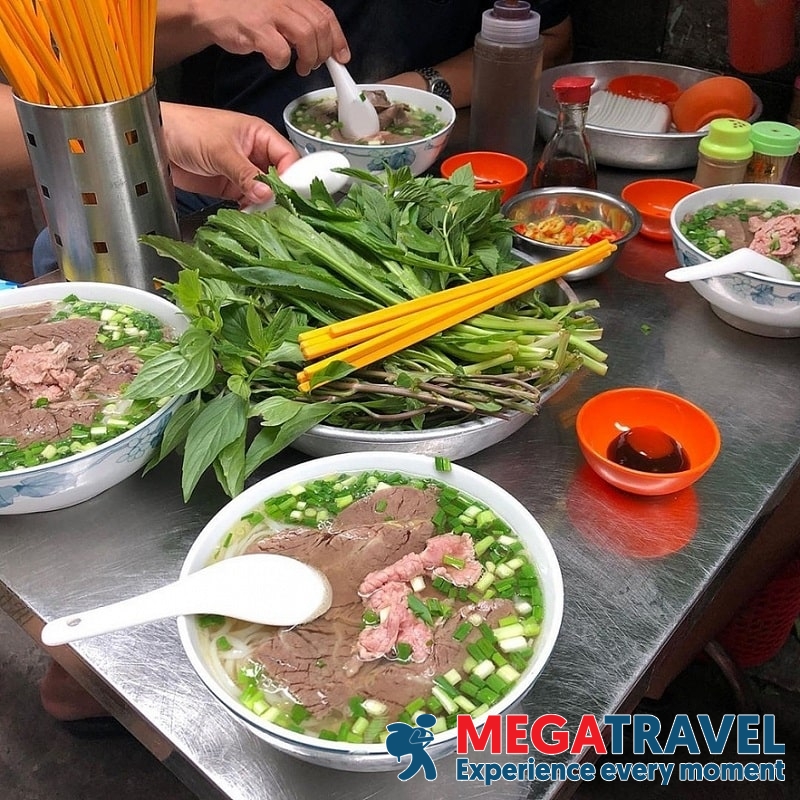 One of the long-standing traditions of Pho Tau Bay is that they still use ceramic spoons because of the belief that pho tastes better when sipped with a ceramic spoon. Irrespective of the spoon, we think this is one of the best locations for pho in Ho Chi Minh City.

Anan Saigon’s pho is a little different from all the others on our list. Their “Truff Pho” has a steep price tag of 225,000 VND (almost $10) which is not entirely outlandish by western standards, but absolutely highway robbery compared to other pho bowls in Vietnam. 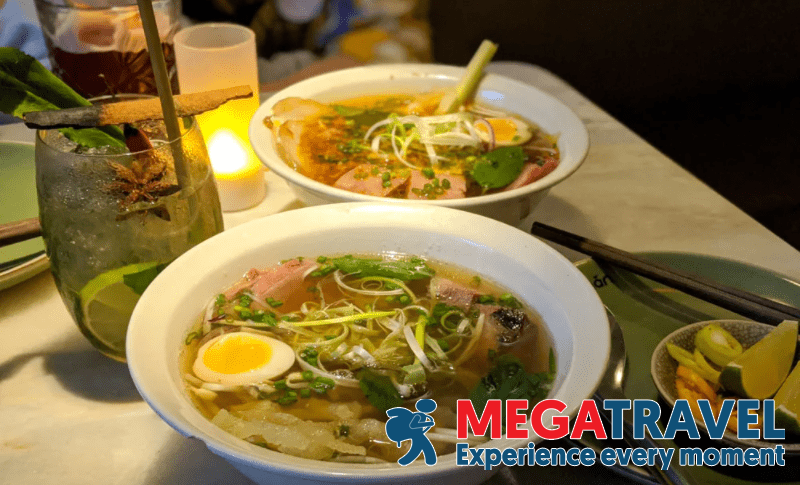 Of course, paying a little more for pho makes sense when you consider premium ingredients like wagyu beef and black truffles in this gourmet bowl of soup. Some people love it, while others believe that the cost is not justified by fancy ingredients. We’re going to leave it to you to decide for yourself if it’s the best pho bowl in Ho Chi Minh City.

The rooftop bar, which has an amazing view of the Bitexco tower, is another great reason to try Anan Saigon. You might as well take advantage of the view if you’re going to pay $10 for a bowl of pho!

Pho 24 is a popular chain sprinkled all over Saigon with Pho restaurants. Although eating pho at a chain may seem boring, their success is due to their pho’s quality. You can always count on a delicious pho bowl, a high level of hygiene, and, most importantly, a dining room with air conditioning. 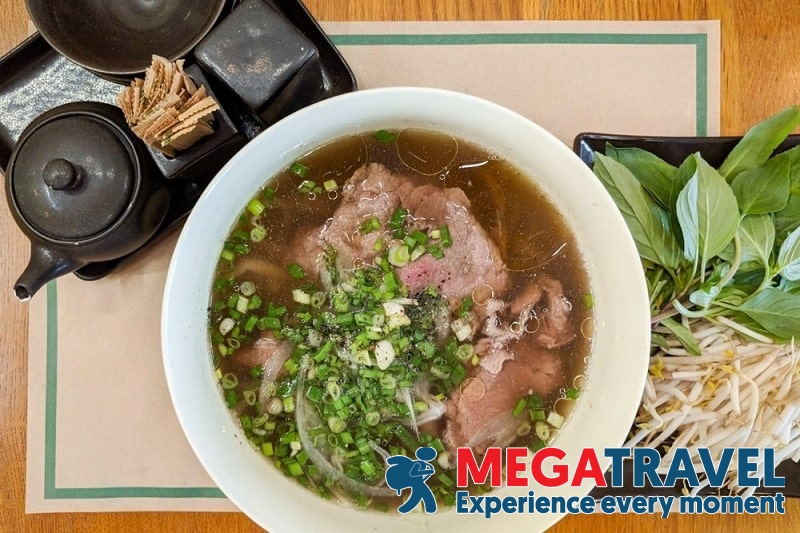 Pho Quynh is one of the most popular pho restaurants in Ho Chi Minh City because of its proximity to Bui Vien Street. Pho Quynh serves an abundance of fresh herbs with fine broth and a decent section of beef. That being said, you’re probably not going to meet any Saigon locals in this tourist pho shop. 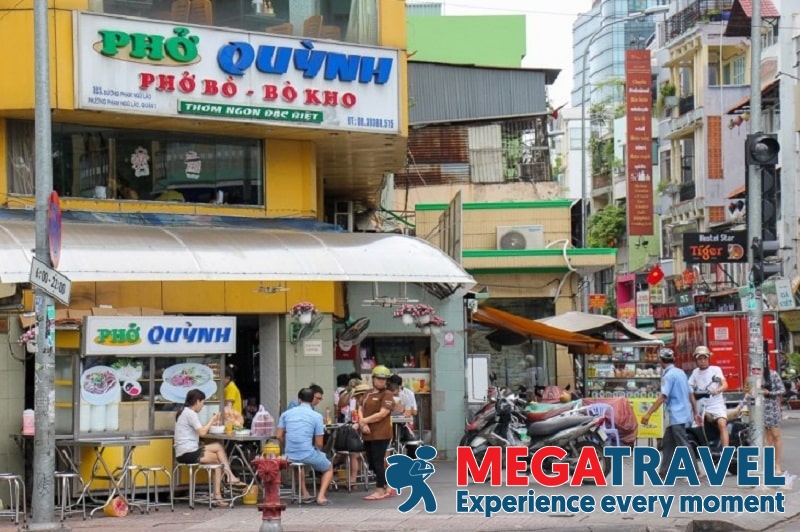 A bowl of pho is going to set you back 69,000 VND. You pay a little more than a comparable bowl of noodles would have cost you anywhere else in the city due to its convenient location.

The pho at Pho Phuong has a special flavor that distinguishes it from the crowd, and this restaurant has developed a loyal fan base because of it.

The broth is dark and complex – full of flavors like cinnamon and anise – with a little sweetness. Strong flavors are not for everyone. And to be honest, we don’t think it’s the best pho in Ho Chi Minh City. Some individuals would, however, argue otherwise. To try Pho Phuong, we’ll leave it up to you and decide for yourself. 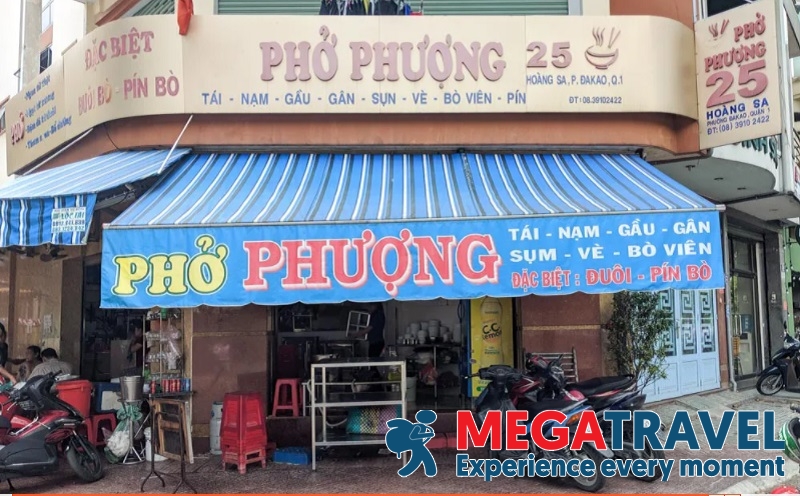 Pho Phuong is situated just north of Saigon Zoo in the Da Kao area of District 1. It’s a lovely neighborhood set next to a picturesque canal, and after a big bowl of pho for breakfast, it’s perfect for a morning walk.

Top 7 best things to do in Ninh Binh